The McGregor Memorial Conference Center is in the heart of Midtown Detroit where you will find relaxing comfort, spacious meeting rooms, views of campus, the reflecting pond and sculpture garden, and stunning architecture. This idyllic scene is offset by the excitement of Downtown Detroit which is nearby. For local and first-time visitors to the metropolitan area, the McGregor Memorial Conference Center is a spectacular starting point from which to experience the vitality of the area. 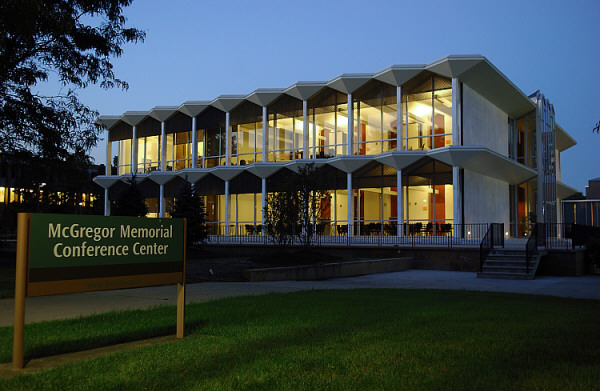 Part of the McGregor Memorial Conference Center's attraction is its location on the campus of Wayne State University – a leading urban research university. The University has degree programs in more than 350 fields including graduate study toward master's and doctoral academic programs such as medicine and law. As part of the University Cultural Center, the McGregor Memorial Conference Center is within walking distance of the Detroit Institute of Arts, the Detroit Historical Museum, and the Detroit Library. Also nearby are the Children's Museum, Michigan Science Center, International Institute and Museum of African-American History. In addition, Wayne State University is home the Hilberry Theatre, which recently celebrated its 50th anniversary, and is the nation's first and longest-running university graduate repertory theatre.

When the sun goes down, the lights go up in Downtown Detroit. A favorite night spot is Greektown which dishes up specially prepared ethnic dinners and entertainment. The Renaissance Center and its towering 72-story Westin Hotel houses dozens of shops and eateries. The Detroit Symphony Orchestra Hall is renowned as one of the best venues for music and theatre with performances throughout the year. Live, professional entertainment also abounds at the Fisher Theatre, Detroit Music Hall, and the Fox Theatre. Just 10 minutes from Downtown, via the international tunnel or bridge, is Detroit's sister city - Windsor, Ontario – a haven for shoppers.